The Trust took responsibility for the restoration of Ince Manor, a Grade 1 listed building and a Scheduled Ancient Monument. Funding was secured from the English Heritage Lottery Fund supported by a loan from the Architectural Heritage Fund.

There is documentary evidence of the landholding at Ince in the Domesday Book of 1086 which records that “The Church itself held and holds Ince” and “there is land for five ploughs”. Ince Manor dates from at least the thirteenth century when it was the home of a monastic community attached to St Werburgh’s Abbey in Chester. Among the notable visitors to the Manor was Edward I who was entertained by the monks for two nights in 1277. The royal visit marked the height of the Manor’s success; by 1943 most of the lands were farmed or leased out to local people. Its role was a monastic grange, a ‘farming output’ of the Abbey at Chester was to provide food and raw materials and to sell any surplus for profit. It remained in Church ownership until Henry VIII’s death in 1547 when it was given to Sir Richard Cotton. Since then it has been passed through various local families.

The surviving buildings comprised the Great Hall and Monastery Cottages, both of which still stand to roof height. The Hall was partly destroyed by fire in 1895 and the cottages had been roofless and derelict for many years, protected by their relative isolation and overgrowth.

In recent years the buildings were purchased by Gerry Fairclough, a village carpenter who set-up a workshop and removed the cottage roofs, hoping to restore the buildings. He died in 1992 and left the property to a village shopkeeper, Dorothy Vaughan, but she died soon afterwards before negotiations for the purchase by the Trust could be completed. In 1996 Cheshire County Council commissioned a study and Ellesmere Port & Neston Borough Council carried out safety work which included the removal of the slates from the Great Hall and the installation of a temporary roof. The buildings and site were purchased in 1998 by Cheshire County Council, on behalf of the Trust.

A preliminary contract was let in 2000, in order that an accurate assessment of the structure and the restoration work required could be made by the design team. Re-usable stone from the site was retrieved and stone from the cottage gable taken down and stored. Archaeologists excavated the Hall floor and made several trial pit excavations. Their investigations did not reveal anything of exceptional interest but some good stonework at the plinth of the building was exposed, together with a vertical rockface adjacent to the Hall.

The existing sandstone walls were carefully repaired and reinforced with new stone. Lost stone walls rebuilt and window openings repaired and new glazing added. The remains of the earlier cottage roof structure were incorporated in the new work which included a new roof structure to the Hall and new lead and slate roof coverings throughout. In addition, the Victorian brick barn which adjoins the Hall was overhauled.

Ince Manor is one of only two remaining examples of standing manorial buildings belonging to an abbey in Cheshire, and there are only five such structures in the north of England. The construction of the surviving buildings presents many archaeological clues to its former development as part of a larger group of buildings. In particular, the trapezoidal plan of the Great Hall confirms that the north wall was built up against an existing building, with the east wall running along the very edge of the red sandstone outcrop or quarry that the building was built from.

When work started, the sandstone walls remained to roof height, however, the overall structures were in a ruinous condition, with the roofs missing from the cottages and a temporary corrugated steel roof partially covering the hall, which was last used as a barn.

Within the thickness of the sandstone walls to the hall is the intra mural passageway constructed to provide an uninterrupted link between domestic quarters at the southern end of the development and the first floor level in the former building beyond the north gable. Lit by arrow slits, the passageway, together with the former crenellations supported by the relieving arches to the parapet, provided the buildings with a defensive system from the 14th/early 15th century.

The north gable of the hall had to be rebuilt entirely in new stone, reinstating the intra mural passageway. The urgency of the repairs to the cottages became apparent as the northwest corner deteriorated dramatically, leaning inches during the period of one day. Each stone was removed, identified and rebuilt exactly as before to sound construction.

A jigsaw of oak trusses, salvaged from site was carefully pieced together and now forms the new roof structure to the cottages. Floors and purlins were reinstated in oak to historic proportions, requiring the use of the latest crane technology to carefully manipulate the timber into position once inside the building. New Welsh slate roofs, steel windows and oak doors now weatherproof these former ruins and a sense of place has been reinstated. 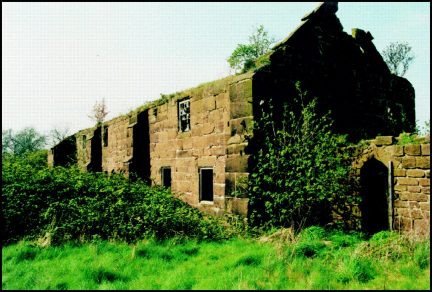 Church House, Tarvin was one of the oldest surviving buildings in the village, but empty, derelict and in danger of toppling into the street. It was purchased by Chester City Council and, in 1985, passed to the Trust for restoration. Work was undertaken by specialists in timber-frame construction and Church House was eventually sold in 1991 as a very fine private dwelling.

The 16th Century Grade II listed building is formerly the parlour wing of a farmhouse. It has a chimney inserted in 1658 with a brick 19th Century extension to the rear. Predominantly timber-framed with a Welsh slate roof, its gables, fireplaces, heraldic plasterwork and mullioned windows are exceptional.

The restoration work had to deal with dry rot, wet rot, woodworm, death-watch beetle, a new roof, work on the sandstone foundations and walls damaged by earlier brick infill.

Tarvin Online states: “Tarvin residents must remain grateful to the group of volunteers, amateur and professional conservationists, who came together in this case to maintain a property that adds so much character to the village centre.” 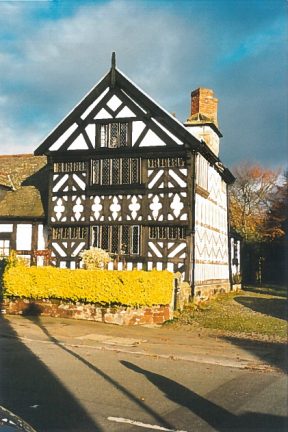 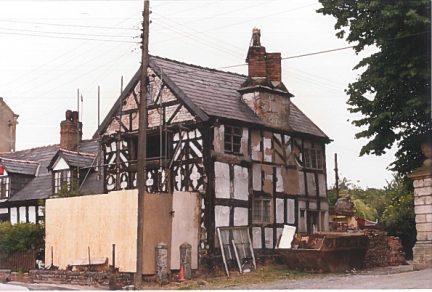 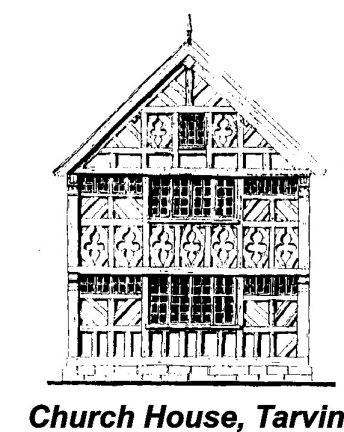 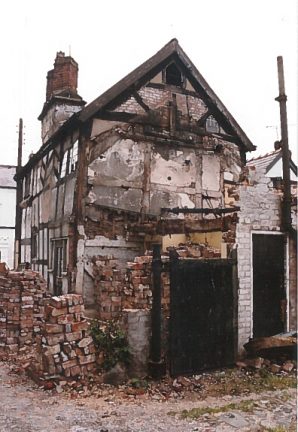 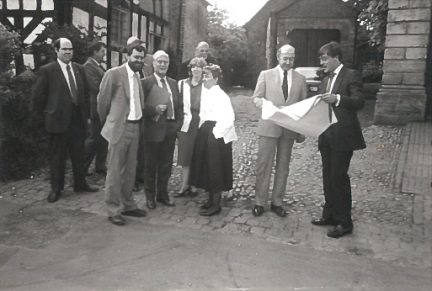